Given that the profitability of the sheep flock is mainly determined by the numbers of lambs sold, it is vital that all rams used are fully fertile before the mating season begins. It is of no benefit to discover an increase in barren ewe numbers at scanning time due to ram infertility.

All rams should be semen tested annually around 6 weeks prior to the mating season. This still allows time to replace any rams that are found to be infertile or sub fertile. Pay particular attention to newly purchased rams.

Electro-ejaculation is the method used to collect semen. The semen is evaluated at the time of collection.

As well as checking semen quality, the rams should be given a general health check including scrotum, testicles, body condition, feet, teeth and brisket – anything that is going to affect their performance during the mating period. 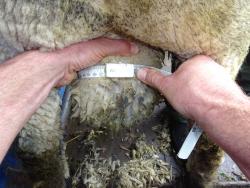